Droids and Holograms: Welcome to the Future of Healthcare

If you want a glimpse into the future of healthcare, then fire up a Star Wars movie or dig out some old Star Trek episodes. It’s all there, from the hand-held scanning devices, the holographic doctors to the artificial intelligence medi-droids.

Alternatively, you could just walk into any intensive care unit (ICU) worldwide to see for yourself how the ongoing Covid-19 pandemic has significantly blurred the lines between future and present, with virtual, human and mixed realities.

For instance, Imperial College Healthcare NHS Trust, which includes some of London’s biggest hospitals such as Charing Cross and St Mary’s, began using Microsoft’s HoloLens 2 holographic device in early 2020 to enable a team of doctors to treat patients remotely via a secure live video feed. This approach enabled the team to overcome a shortage of personal protective equipment and reduce the risk of putting valuable critical care experts at risk through unnecessary physical contact.

Consultant surgeon and senior lecturer at Imperial College London, Dr. James Kinross, explains that the decision to roll out a mixed reality solution was made in March 2020 when hospitals in the United Kingdom were overrun. “We lost a third of our team in a week,” said Kinross. The solution was to create completely virtual ward rounds, sending in just one doctor equipped with the HoloLens headset. Wearing the headset, the user could see a virtual, mixed-reality screen that allowed them to interact with colleagues via a webcam and access digital images and x-rays at will.

“I can see a point where these sorts of tools will be the norm,” says Kinross. “I think what’s been very important about Covid-19 is that it has…[resulted in] a huge step-change in our perception of these technologies and what value they might bring.”

One such emerging technology is the ICU artificial intelligence (AI) embodied by the University of Pretoria’s mobile AI, Stevie.

South Africa’s first obstetric ICU specialist, Professor Fathima Paruk, is the academic and clinical head of the University of Pretoria’s Department of Critical Care at Steve Biko Academic Hospital. She is also president of the Critical Care Society of Southern Africa and led the roll-out of Stevie at the Steve Biko Academic Hospital’s ICU in July 2021.

Some call Stevie a robot, but Paruk explains that this AI is really a platform that permits audiovisual communication. The AI is also part mobile diagnostic machine with a port to attach a stethoscope. However, concerns around personal information protection mean that this is an aspect that has yet to be explored. What has been liberally used is the ability to collaborate instantaneously with the University of Pretoria’s telemedical collaborators in Germany at the Enhanced Recovery after Intensive Care (ERIC)-Tele ICU at Charité Medical University in Berlin with the support of Germany’s public health institute, the Robert Koch Institute.

Stevie comes with a privacy handset to facilitate live and confidential communication during ward rounds and high-definition pan-tilt-zoom cameras that aid the close-up digital diagnosis of patients – be they in South Africa or Germany.

“Recently, our colleagues in Germany presented a patient of theirs for discussion, so the relationship is very reciprocal and is snowballing,” explains Paruk. She notes that via Stevie, specialists at Steve Biko Academic Hospital can consult with Germany and specialist trainees at the University of Pretoria can participate in tutorials and discussions, giving them a different perspective on treatment approaches and paradigms, while simultaneously freeing up senior clinicians to focus on clinical work.

Quintin is essentially a tablet on wheels that serves as a virtual communication conduit between doctors and their patients and, more importantly, between patients and their families at a time when distance is often one of the hardest hurdles to healing.

With the Health Professions Council of South Africa having amended its regulatory framework during the Covid-19 pandemic to create space for the use of telemedicine and AI in healthcare, Paruk is convinced telemedicine is here to stay. “I foresee its uptake increasing and it being introduced in many medical disciplines in South Africa, both public and private,” she says. While some of these innovations will be bold, flashy and revolutionary, others will just unobtrusively make life easier.

The rise of the medical tricorder

As far back as 2019, medical futurist, Bertalan Mesko, has asked whether the futuristic medical tricorder, which was made famous by Star Trek doctors, would ever find its way into the hands of modern-day clinicians. An all-in-one device that could analyse diseases in an instant may seem a long way off, but Mesko points out that the visual display device used by Captain Kirk in Star Trek is now Google Glass, a head-mounted display in the shape of glasses that off-site experts could use to deliver instructions to surgeons during complicated procedures. Similarly, the heads-up display in the film Minority Report is now air touch technology, not dissimilar to that used by the NHS Trust in London.

“More often than not, sci-fi is a lot more than just fantasy,” says Mesko. “It shows the way forward and, technologically, the tricorder is absolutely viable. In 2014, the Tricorder XPRIZE contest offered US$10 million for a device capable of accurately diagnosing a set of 13 medical conditions and continuously measuring five vital signs. In the end, even though no team met all the requirements, two finalists came up with a tricorder-like device.”

Even without a viable device on the market as yet, Polaris Market Research projects that the medical tricorder market will be worth US$4.9 billion by 2027.

It might not be a medical tricorder, but one hand-held device that Paruk says is already proving a game-changer for doctors is the portable ultrasound. While a lot of hype has been swirling around the media about AIs like Stevie and Quintin, for Paruk, a technological advancement that is currently offering great value is the relatively inexpensive pocket-sized ultrasound machine. Ultrasounds use sound waves to create sonogram images of organs, tissues, and the body's inner workings.

“I’d take a pocket ultrasound over a stethoscope for many situations,” says Paruk, noting that they can be used by trained clinical technologists, nurses and doctors. And, given that nurses are in such short supply, this is likely to be an invaluable tool in the hands of junior doctors in the future. Which begs the question: where do humans fit into the future?

Paruk believes achieving a balance between hands-on human and technological options will ultimately define the future of medicine. With her love of technology, new applications and ideas, she is excited about the new direction in which the profession is heading, whether that means virtual reality, simulated training labs or hand-held diagnostic technology and virtual consultations.

“We are moving very fast into the future in terms of tech,” she says, while warning that without careful application and controls, an over-reliance on these new technologies could have adverse effects on clinical skills. This is something hospitals, and particularly academic hospitals, need to be keenly aware of as they train the next generation of medical professionals.

However, the need to avoid digital dependency pales in comparison to the potential that telemedicine has to materially change the healthcare sector for the better. With some 80% of South Africa’s population currently accessing the public health system, and with medical aids becoming increasingly unaffordable for many, the burden of healthcare will increasingly fall on a fragile and under-resourced public system, says Paruk.

Using technology wisely can help alleviate some of this pressure, but only if the transition is handled in an ethical manner, Paruk believes. “Ethics is key,” she says, referencing the use of secure lines to transmit sensitive personal data. But other ethical conundrums are rising out of the mainstream use of telemedicine, from the confidentiality of records to data security and standards, malpractice and liability, informed consent, and even dealing with issues around patient isolation and disconnect from medical professionals.

“Globally, the uptake of telemedicine has been steep over the past two years,” says Paruk, noting that, currently, the role of technology is still to enhance and not to replace healthcare practitioners. But this may not always be the case. Therefore, paying careful attention to the implications for both physicians and patients will be key to ensuring that specialists of the future don’t find themselves trotting out the words of Star Trek’s irascible Dr. Leonard ‘Bones’ McCoy, “Damn it, man, I’m a doctor, not a torpedo technician”.

AI to the rescue?

South Africa is short on ICU beds and, according to Professor Fathima Paruk, has a disproportionately small percentage of registered ICU-trained specialists called intensivists. Can technology plug the gaps?

Paruk notes that the number of trained ICU specialists in South Africa is just over 100, and most of these are based in Gauteng, the Western Cape and KwaZulu-Natal. Furthermore, the majority of public ICU beds – about 75% - are also located in these three provinces. “The Western Cape has five ICU beds per 100,000 population,” explains Paruk. “Limpopo and the North West sit at 1:100,000.”

South Africa is not alone in this limited critical care capacity. In 2020, the United States-based Centre for Disease Dynamics, Economics and Policy undertook an analysis of Africa’s 54 countries and determined that there was an average of 3.10 ICU beds per 100,000 people. This ranged from 0.53:100,000 in low-income countries to 8.59:100,000 in upper-middle countries. Seychelles top-scored with 33.07.

Meanwhile, the definitive number of ICU beds in South Africa remains mired in mystery. According to Reuters, “A ministry presentation in April [2020] put the total at around 3,300, with two-thirds of those in the private sector. Healthcare provider, Netcare, estimates there are some 6,000 beds, with around 3,800 in private hospitals.” That would equate to either 5.6 ICU beds per 100,000 or 10.2 per 100,000.

As a result of the lack of critical care beds in South Africa, coupled with a shortage of ICU specialists in both the public and private sectors, Paruk believes the use of technology to enhance the work and resources at hand is an important step in creating a more organised, safe, efficient and equitable healthcare system. And that means embracing the likes of AI, technological advancements and telemedicine.

Healthcare organisations are turning to digital innovations, from cloud computing to data analytics, the internet of things and even blockchain. About 60% of such organisations have done so during 2020, according to CB Insights, a technology-focused market intelligence platform. Meanwhile, 42% said they were accelerating their digital transformation plans. This driver, alongside a need to improve the patient experience and ensure greater healthcare equality, was helping to drive medical innovation and technology uptake.

Big-name companies like Facebook, Apple, Microsoft, Google and Amazon were all dabbling in health initiatives in 2021, from Google’s Derm Assist, an AI-powered smartphone app to help diagnose skin conditions, to a potential Facebook smartwatch with a built-in heart rate monitor. In the third quarter of 2021, 10 new healthcare unicorns were born, driving up the number of global healthcare unicorns (start-ups with a valuation of over US$1 billion) to 91.

Sex, Drugs and AI Eurovision: How Taboo Trends are Shaping the Future 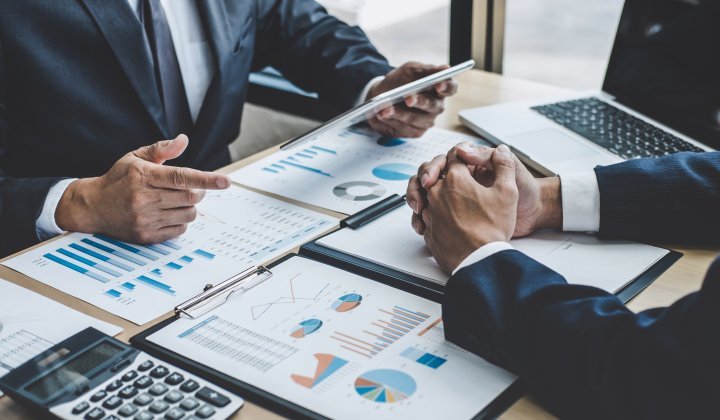 Putting Human Beings Back Into Finance