The Point of No Returns

Mining—and South Africa’s broader economy—has reached a crisis point, says Mark Cutifani, Anglo American CEO. In a recent and widely reported speech at GIBS, Cutifani called for government, business and labour to work together to create a more competitive environment. At the same time, he warned that South Africa’s mining is not delivering sufficient returns to attract investment. 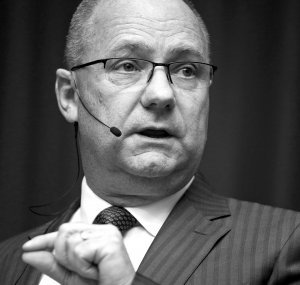 Mining—and South Africa’s broader economy—has reached a crisis point, says Mark Cutifani, Anglo American CEO. In a recent and widely reported speech at GIBS, Cutifani called for government, business and labour to work together to create a more competitive environment. At the same time, he warned that South Africa’s mining is not delivering sufficient returns to attract investment.

On the future of mining in South Africa: The mining industry is one of the foundations upon which South Africa can build its future…it can be an engine in its own right and it can help us develop  skills and expertise that can be applied across a much broader range of businesses.

Traditionally, the mining industry has also been a source of great competitive advantage for South Africa, but if we cannot at least arrest its decline in productivity and reduce our costs, we won’t have a viable industry to build the country.

On productivity: Above all, the South African [mining] industry has to be more productive. That is, we must produce more product per person employed. If we don’t get that equation right, we don’t have a future.

On mining finance: Put simply, the cost of capital is high and rising, not falling as you may think. And by that I mean that as our credit ratings drop, even though we’ve had relatively low interest rates, the costs to borrow funds for companies like ours are going up because our credit ratings have been impacted by people’s perceptions of the jurisdictions in which we work. So the drop in ratings of South Africa is a serious issue for companies that work or who are based in South Africa. That’s a critical issue.

On labour: Our long history of adversarial labour relations, and particularly the trust deficit between labour, business and government, which has been accentuated in the Marikana tragedy, remains a great challenge for us to rise to. This is severely hindering the creation of a more efficient mining industry and of a more competitive South Africa.

On competition: In order to create a competitive South Africa, government, business and labour must work together; there is no other way. The government has a vital role to play in leading, facilitating and encouraging dialogue around accelerating the implementation of the NDP. We must build bridges and find common ground.

As a mining leader, I think our sector should be putting its full weight behind the structural reforms identified in the NDP, and specifically, President Zuma’s nine point plan. I believe the latter shows considerable foresight in looking at the long-terms needs of the country, particularly in regard to energy, broadband, and enhancing the value chain in mining and agriculture …. Mining, however, can only again become a core driver of South Africa’s economy, helping to deliver on the great expectations placed on it in the NDP, to the extent that the conditions are put in place to support an attractive climate for investors.

Where investors don’t see those returns, they don’t invest. And for us, in the long term, that means lower national tax receipts, fewer jobs and less sustainable communities. To think otherwise is to show a profound misunderstanding of how modern, global capital markets operate.

On China: In China, relatively low salaries, improving productivity levels, and the propensity of the Chinese people to put money away in the form of savings, have together helped create a virtuous cycle of investment infrastructure…wage improvements from that lower base have also been driven by productivity improvements, and that’s also supported continuing investment.

On State-Owned Enterprises (SOEs): SOEs play a crucial role in our economy…and to a large extent, the ability of South African industries to compete globally is influenced by the effectiveness of our SOEs. Many South African industries rely on and intersect with the services provided by SOEs at critical points in our processes, whether relating to the provision of energy, rail or port services. Unless all the links in the chain develop at the same rate, and in collaboration with one another, a pinch point will appear and the chains will break, or at least be severely constrained. That impacts all of us in terms of what we produce and the effectiveness of us being competitive…So in simple terms, for South Africa to be successful, we have to be equally efficient and successful and continue to transform the effectives and productivity of our SOEs, along with the private sector.

SOEs form an integral part of the backbone of our economic and industrial infrastructure. They must be prioritised for investment and they must be led through the lens of commercial decision-making.

On South Africa’s advantages: We have some of the world’s greatest mining assets and minerals resources, according to estimates worth between $2.5 and $3.0 trillion, although maybe not at today’s prices! We have a highly developed physical infrastructure of roads, airports and railways, including dedicated rail links and ports for the export of minerals, and mobile communications. We often underestimate or undersell the quality of the infrastructure we do have in place, although I think we share a frustration that we’re not operating it as well as we could. Compared to many other jurisdictions, we’re still pretty well positioned in the game.

On South Africa versus Nigeria: Those that have visited [both] Nigeria and South Africa would still rank South Africa well ahead on terms of our infrastructure and the skills that we have available to us and how we are generally managing our affairs in the country. We’ve got world-class universities and business schools. Our international reputation in the field of medicine is almost second to none. We are a first class tourist destination - if you can get a visa!

On the visa issue: It is a very big one. We, as a company, rely on the Chinese to buy diamonds. They have only two locations where they can personally front up and have their visa photos [taken]. So…most of them are unable to get into the country to perform the work required to buy diamonds. We’ve made it almost impossible for the Chinese to come here and do business, which we absolutely rely on. So we do ask, when policies are set, that the potential unintended consequences are considered.

On strategic minerals: Please carefully consider the implications of declaring a mineral as being strategic in terms of investment appetite. In fact, there’s nothing wrong with declaring a mineral strategic, but let’s make sure the implications of that declaration protect the rights and ownership of those that have invested monies, per the Constitution, so that there’s no investor scared to invest because they think a government may change the rules … We must apply international commercial logic to the beneficiation of mineral products.

On BBBEE and failure: I think we’ve made a mistake … we’ve not let BEE companies fail as a conscious policy decision. It is the right thing to do everything you can to make sure the company succeeds. But if it’s going to fail on the basis the leadership is not able to compete, then the tough reality that has to be faced is maybe it should fail. The money that could have been otherwise directed to a new and emerging BEE player may be better spent on that group who will make it work. If prop up those that can’t be successful, we do those that can be and will be and have the desire and the capacity to be successful, we do them a disservice.

On learning: In actual fact, we’ve stolen many ideas from Toyota, Ford, BMW and the petrochemical sector for our developing and operating model, which is more a manufacturing approach in the mining industry. We believe learning from other industries is actually more important for our future because [mining] is generally a pretty closed shop, a small group, we learn from each other, we steal each other’s good ideas. What we don’t tend to do is steal from other industries or other thought leaders, and we think that’s the place we’ll get the best ideas.

On leadership: If we want to be seen as leaders, we have to put some personal skin in the game and be prepared to lose. And lose personally. Because if we don’t then I think we fail the test of leadership.