There’s a 21st birthday happening this year in Cape Town. One of South Africa’s most successful retail design agencies has come of age and Acumen traces its formative years.

Motorists on Cape Town’s Marine Drive, which has the picturesque waters of Table Bay to the one side and the warehouses and factories of Paarden Eiland on the other, may have noticed some anomalous developments of late. Amidst the hodgepodge details of marine industria a compound of buildings suddenly and all at the same time turned a rich, storm cloud grey. A glass fitment centre at one end of the compound transformed into modern exhibition space and adjacent to this, ending a long tyranny of chip and salomie shops with Coca-Cola hoardings, the distinctive coronet of the Vida e Caffè brand has appeared. 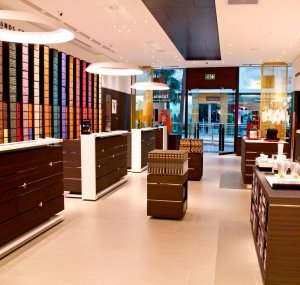 On closer inspection, this space becomes more intriguing still. A large roof, little more than a catchment for seagull guano these last years, has been transformed into an elaborate garden with decked walkways and benches with tremendous outlooks across the bay.

The discrete sign at the entrance to this compound informs you this is the TDC&Co. Campus. Is it some sort of technical college, you wonder? Well, I did.

TDC, it turns out, stands for Think. Design. Connect. We design and build beautiful spaces, the website claims, and there’s a note informing you that the company has its 21st birthday in 2015.

The jolt comes when you hit the page of client logos, and realize that you’ve probably been exposed to examples of the company’s work twice that day already.

“When people ask if they can see a portfolio, I ask “where do you live? Ok, go and look at the following…” because whether it’s Lydenburg or Ladysmith, Cape Town or Calitzdorp, we’ve designed something they will be familiar with,” says CEO and founder, Derek Patrick.

In the early 90s, Patrick had a secure job as a designer with Woolworths. However, as South Africa’s transformation from pariah state to rainbow nation neared, he had begun to sense that his long hair and earring did not fit him for the fast track to corporate success.  He decided to make his own quiet but hopeful leap into independent retail design, launching The Design Company from his Cape Town apartment in April 1994.  Designer Wayne Krull, now the owner of Phoenix 5 Productions, was The Design Company’s first employee. He remembers working out of Patrick’s spare room, “until the work came in, and we expanded to the dining room.”

“The drawings were all done by hand, for example, and the only way you could send these overseas was to cut them into long A4 strips, which you would then feed into a fax machine. Then of course the world started to go digital, and I don’t remember that transition being smooth at all. I was almost killed one day by a computer that had been thrown from a window by Derek, who had been having one of his battles with our CAD (computer-aided design) system,” Krull recalls.

Current Group MD and now co-owner of TDC&Co., Marc Olivier, joined the company in 1998, and together Patrick and Olivier began forging a relationship with The Foschini Group, which was to become the bedrock of the company’s growth.

To give dimension to this relationship, Olivier mentions that every @Home store between Cape Town and the Middle East (and there are well over a hundred of them) has been designed “and the materials procured” by TDC&Co.

“Our oldest clients have been with us for 17 years, which in this industry is very unusual,” says Patrick.

“This might sound a bit twee, but we choose our clients, just as much as they choose us. We have a rule that if a job is not going to be enjoyable, we won’t do it, and I believe it is this that has helped us to sustain our passion, energy and creativity,” he says.

As the company’s client base broadened, so its operations began to diversify organically. Patrick and Olivier began to identify gaps in their operating environment, which the company was well positioned to cover. They realized, for example, that the mass stores sometimes experienced difficulties in bringing their designs to life, because the dimensions and configurations of their retail spaces tended to vary.

“We started providing individual working drawings for shop fitters, to give the clients fuller ownership of their own concepts,” says Olivier.

In 2011, Patrick and Olivier initiated a restructuring process aimed at organizing and optimizing the company’s diverse capacities.

“We created five distinct business units, each with the potential to become its own profit centre. We now have an interior design unit, a drawing office, a procurement and implementation unit, a branding division called Clrs&Co. and a division offering architectural management services. In practice what this means is we can walk beside our clients every step of the business setup process, even working directly with landlords on behalf of our clients to ensure that their spaces are actually developed according to their exact specifications. It is this level of service that is proving particularly attractive to international companies looking to move into the South African market,” says Olivier, and he backs the talk up by naming three recently acquired internationals: Zara, Nespresso and David Jones.

By 2014, the company’s name no longer encapsulated all that The Design Company could do, and so the brand was pegged to the acronym by which the company has been known for years: TDC.

“The &Co. part of the name acknowledges the close internal and external relationships that the company prides itself on,” says Olivier.

Of all the developments initiated at TDC&Co. in the last two decades, none has been more radical, trusting or progressive as the company’s shift in recent times from a top down management style to one which sees all employees as leaders, capable of taking responsibility for the work they were employed to do.

“Ultimately, what we do is sell intellectual property, and so our primary investment should always be in our people. It is critical that we are all learning all of the time, and that’s why we’ve named our office address the TDC&Co. Campus. Derek was one of the founding members of Boston College, and so we always have interns and students here. We see ourselves as an academy, a learning institution,” says Olivier.

To ensure employees have the skills and wherewithal to assume greater responsibility, the company has hired performance and communication coaches. This approach has freed Patrick and Olivier up to explore new opportunities for the company.

“The country is at this extraordinary juncture where established South African companies are increasingly looking to expand beyond national borders, while international companies are scrambling for a foothold in the South African market. We believe we’re well placed to cater for both trends and in fact we’re already doing this. I’ve mentioned the names of brands we’ve already helped to enter the South African market, but since the 90s we’ve been helping big South African retailers like Foschini and Woolworths to set up in the Middle East. More recently we’ve helped South African companies to break into burgeoning African markets, such as Namibia. I truly believe that we are on the cusp of another big step, and that the next 20 years are going to be our most interesting and fulfilling,” says Patrick.